Irisa Nyira is a member of an alien species known as “Irathients”, and is essentially the deputy to lead character Joshua Nolan. Smart, independent and feisty, Irisa still struggles with the weight of her unusual upbringing. A drifter since birth, she only stays in Defiance due to the loyalty she feels for Nolan.

Nolan rescued Irisa at a young age and has encouraged her to leave behind her traumatic past. The two have been inseparable ever since, and Nolan has said that Irisa is a war orphan that he found abandoned in what was once Denver. However, it has been hinted at that she and Nolan have something of a dark history that will be explored more deeply as the series develops.

In episode "Pilot", Irisa tells Tommy Lasalle casually that Nolan murdered her parents. Irisa has scars on her wrists that indicate a painful and unhappy past, and in episode "Down in the Ground Where the Dead Men Go" she mentions that she hates chains. When Nolan is promoted to Lawkeeper, Irisa was appointed Deputy.

Irisa often has visions in her sleep of the past, present, and future. Whether these visions are directly connected to someone else's life, or are simply randomly pulled from her mind is a mystery.

At the beginning of "Pilot", she has a vision of Josh Nolan's world, and of the day that the Votans arrived at earth. In "The Devil in the Dark", she continues to have these visions. Nolan has always dismissed these as post-traumatic stress disorder, but they prove to be key in foiling a Hellbug attack on Defiance. According to Sukar, following a clairvoyant Irathient ritual, Irisa was touched by the gods and has "the sight." Irisa is angry at Nolan for making her believe for all of these years that there was something wrong with her (for a human child, such visions are usually a sign of mental health problems). Nolan, in turn, is jealous of Irisa's needing to turn to Sukar for guidance in the use of her new gifts.

Irisa is the adopted daughter of Nolan and arguable spiritual protege of Sukar. She has a rocky but significant relationship with Rynn, as well.

Irisa and Tommy Lasalle began a romantic relationship in "The Serpent's Egg", which has continued throughout Season One. Their relationship experiences notable development in "The Bride Wore Black" and "Past Is Prologue", wherein the pair are seen holding hands at a wedding and enjoying classic literature, respectively, indicating the attraction is more than merely sexual. 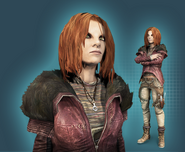 Retrieved from "https://defiance.fandom.com/wiki/Irisa?oldid=11230"
Community content is available under CC-BY-SA unless otherwise noted.