Season 1
"Pilot"
"Down...Dead Men Go"
"The Devil in the Dark"
"A Well Respected Man"
"The Serpent's Egg"
"Brothers in Arms"
"Goodbye Blue Sky"
"I Just Wasn't Made for These Times"
"If I Ever Leave This World Alive"
"The Bride Wore Black"
"Past Is Prologue"
"Everything Is Broken"

Kenya Rosewater is the beautiful spitfire who runs the NeedWant, the town’s bar and brothel. Self-assured and dauntless, she has an unwavering devotion to the town that has inexorably woven her into many of its complicated affairs. Raised by her more responsible sibling, Kenya rebelled by making trouble and embracing her sexuality. She has a keen insight into the needs of others, but a blind spot when it comes to her own emotions.

During the Pale Wars, Votans unleashed weapons of mass destruction across the globe. Much of Kenya (the country, not the person) was destroyed when an Indogene scientist unleashed a cluster of terraspheres upon the unsuspecting citizens. On this day, Kenya Rosewater was born and given the name "Kenya" in tribute.

Growing up during the Pale Wars, Kenya's older sister, Amanda, helped protect and entertain Kenya as best she could. When Kenya was very young, they would build forts out of oil drums and fall asleep listening to the sound of gunfire. This angered their mother, but the sisters were ok because they always had each other.

When Votan armies surrounded Manhattan, the three Rosewaters found themselves trapped. When the invasion finally came, Kenya got separated from her mother and Amanda. Their mother wanted to flee with Amanda, but Amanda refused to leave Kenya behind. After Amanda went back to search for Kenya, she never saw her mother again. Although she didn't know what happened to their mother, Amanda assumed she died in the invasion. Not wanting to burden Kenya with the painful truth that her mother tried to abandon her, Amanda told Kenya that their mother died bravely and gave Kenya a necklace she had found while scavenging. She made up a story about how the necklace represented a saint named Finnegan who watched over children in an effort to sooth Kenya. Kenya cherished this necklace and kept it the rest of her life.

As Kenya grew older, she worked as a "reindeer," sneaking onto Earth Military Coalition bases to sleep with the soldiers in exchange for travelling money (and the ability to piss off her sister, Amanda). [1]

When Kenya and Amanda were traveling west towards Defiance, Kenya would get terrible night terrors where she'd flail in her sleep while screaming. Sometimes she'd even wander off. One night, Amanda found her asleep in a field of Necronies, a flesh eating flower. Luckily, they only bloom in sunlight, and Amanda got her out before she was hurt.

Shortly after Amanda and Kenya's arrival in Defiance in 2037, Kenya took a job as a waitress at the NeedWant, a restaurant and hotel founded by a man named Hunter Bell. The two began a relationship and were soon married, but shortly after their marriage, he began to abuse her. In 2039, he was murdered, and Kenya took over his business, turning it into a brothel. When Kenya took over, she made it clear to her employees that they should always feel in control of their own sexuality.

Amanda mentions that Kenya had a habit of running away and that she loved to travel. Kenya would say that in order to appreciate the places you're going that you have to leave behind the places you've been. She loved going out into the world, seeing new things, having new experiences, and she never looked back. She never dwelled on the past. She called it being morbid.

When Joshua Nolan arrives in the town of Defiance, Kenya charms him and he purchases time with her. After this initial encounter, they have repeated encounters as night porter and client until Kenya decides she wants him to stop paying for sex. She makes it clear that she doesn't want to label their relationship, but he's no longer a client. It doesn't take long for Kenya to realize she's starting to develop feelings for Nolan which are impacting who she takes on as a client, so she breaks things off with him, but quickly forms a fondness for a new client, Stahma Tarr.

Kenya pities Stahma who she thinks is trapped in an abusive relationship. She encourages Stahma to think of herself and not just her husband and son. Stahma's husband, Datak, is also a client of Kenya's, but as she grows closer to Stahma, she stops seeing Datak. Stahma warns Kenya that Datak will kill them both if he ever finds out about their affair, but Kenya proceeds despite the danger.

After Stahma frames Nolan in an effort to hurt Amanda by association, Kenya and Stahma's relationship is irreparably damaged, and Kenya lets it slip to Datak that she and Stahma have been having an affair. After the truth is out, Stahma tells Kenya that she wants to run away with her, but when Kenya meets her in the woods, Stahma hands Kenya a poisoned flask, and she dies in Stahma's arms. As Stahma warned, Datak did not respond well to learning of his wife's affair and demanded that she kill Kenya to get rid of her. Later, Datak reveals that he knew Stahma was in love with Kenya and did not expect her to actually kill her. He wanted her gone and thought Stahma would simply send her away.

An Indogene duplicate, implanted with a personality based on Amanda's memories and perception of Kenya, shows up in Defiance during season 2. Although Amanda wants to believe that this woman is really Kenya Rosewater, Nolan and Stahma independently figure out that it's not her, and Amanda is forced to face the truth that her sister is dead. A funeral is held in her honor. Nolan, Amanda, and Deirdre “Treasure Doll” Lamb are in attendance. Stahma Tarr places a purple grave stone in her memory. 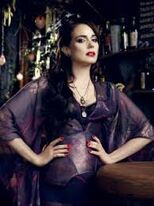 Kenya, in front of her bar
Community content is available under CC-BY-SA unless otherwise noted.
Advertisement