Rynn is a female Irathient, and alongside her father figure Sukar, leads the Spirit Riders.

Rynn, Sukar and the Spirit Riders accost Nolan and Irisa at an arkfall. Sukar takes Irisa captive while Rynn threatens her, before Irisa and Nolan escape the group. Later Rynn and Sukar, driving Nolan's stolen roller, discover the Volge advancing on Defiance and ultimately join Irisa to flank and help defeat the menace. At the end of the episode they are shown celebrating in the NeedWant.

"The Devil in the Dark"Edit

Rynn, Sukar and the other Spirit Riders return to Defiance. In retaliation for the death of her parents, Rynn instigates a Hellbug attack on the town and is ultimately arrested.

Rynn is placed aboard a landcruiser for transportation to the prison in Vegas but is provided with a tool to escape. She does get away during the attempted hijacking of the landcruiser. She returns to save the lives of Nolan and Amanda then departs for San Francisco.

Rynn appears at the end of the episode, bitter about what has happened to Sukar and seemingly threatening Irisa. 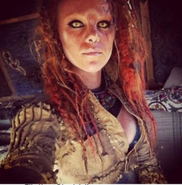 Add a photo to this gallery
Retrieved from "https://defiance.fandom.com/wiki/Rynn?oldid=10666"
Community content is available under CC-BY-SA unless otherwise noted.