Defiance is an upcoming science fiction television series AND a MMO videogame. This tie-in series will include a brand new television show that will premeire on SyFy, as well as a massively-mulitplayer online game developed by Trion Worlds. The show is set to air on April 15th, 2013, and the game will go live tomorrow, April 2nd, 2013.

THANK YOU TO ALL WHO ENTERED. THE WINNERS HAVE BEEN CONTACTED AND WE WILL ANNOUNCE THEM PUBLICALLY ONCE THEY CONFIRM THE PRIZE. 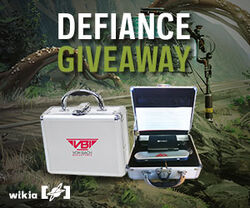 To celebrate the impending launch of this new series, we have TWO Defiance Prize Packs to give away. To enter, simply log-in (or register) into your Wikia account, and then leave a comment to this blog post answering the following question....

"What series would you like to see a game/television show crossover for?"

Retrieved from "https://defiance.fandom.com/wiki/User_blog:TheBlueRogue/Defiance_Prize_Pack_Giveaway?oldid=5522"
Community content is available under CC-BY-SA unless otherwise noted.